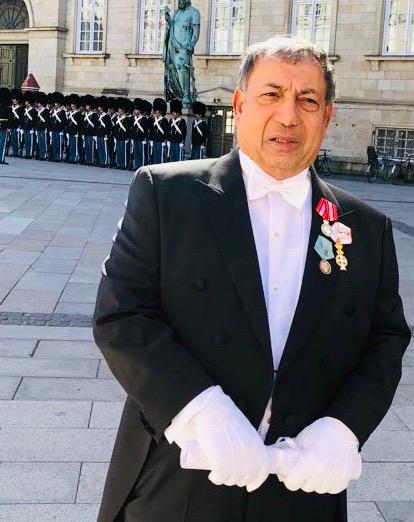 Mr Enan Galaly, internationally recognized as a leading and inspiring entrepreneur has taken the hospitality industry by storm.

Founder of Helnan Hotels , Chairman “Advisory Council of the International Association of University Presidents”, has been awarded more than an honorary doctorate in recognition and honor of his status from many countries such as the United States of America and Japan in the presence of thousands to listen to his words and speeches.

Ambassador of Denmark for the historical Relations to the Middle East, holds the title of 1st Degree Knight of Dannebrog from her majesty the Queen of Denmark Margrethe II, in addition to multiple prestigious posts.

Born in Heliopolis – Cairo to an academic family, as a youngster, Enan was a Scout leader and an active member in many social and sports activities, disregarding the educational studies which affected his performance in school to be the last in the classroom for years. He felt as a stranger among his punctual intellectual family members and friends, consequently he decided to be a stranger away from home. Until today and after all these years, he is still feeling like a stranger. Enan has left his homeland “Egypt” before completing high school, without financial resources, but only with ten pounds in his pocket as well as in the other pocket he had the values and traditions that have been cultivated deep in his conscience that grew more and more lately.

In Vienna, he was selling newspapers on the streets, had different temporary jobs and for many times stayed at a homeless institution in Vienna center. After that, he moved further north to Denmark and worked there as a dish washer without pay but in return of a meal, then he worked voluntary at various jobs even at his free time in hotels and restaurants to expand his experience and gain respect. After several years in Denmark, he became a Danish citizen and inaugurated in the hospitality industry. He occupied different positions until he became “Assistant General Manager”.

Thereafter, he was promoted to “General Manager”, when he was still in his 20s, by the time he was about 30 years old, he became Managing Director and President of the Hvide Hus Hotels Chain which was at that time the largest hotels chain in the country, After years, he became an employer for an approximately 5000 employees serving everyday thousands of meals and beds at 1st class hotels under his flag. He worked hard on the Know How of developing human beings , business, starting by himself, the communities, the hotels, followed by the cities and even the countries, so he became an international entrepreneur who offers a social meaningful significant vision that would attract and inspire others.

Galaly founded HELNAN, a name that belongs to his roots which still blossoms in his heart – the letters HEL stands for Heliopolis, where he was born and keeps his childhood memories, while the second half NAN is derived from the last letters of his name. The first Hotel owned by Galaly in Denmark is the historical Phoenix Hotel- Aalborg that was built in the 18th Century. The hotel named after the Arabian Phoenix, a mythical bird in the Phoenician old story which was burnt in the sun temple of Heliopolis to leave Egypt and rose up again in Europe. This story resembled what Enan had been through in Egypt until he left the country to start his journey of future life in Western world.

Enan has found the way back to his native country by the efforts exerted through Helnan using experience, network and financial tools. He started to invest and operate two 5* hotels in Cairo and Alexandria where he had family memories. Together with his group Enan has managed about forty 5* and 4* hotels in different parts of the world.

Helnan which owns and operates first class hotels in several countries, is famous for supporting several social, economic, historical and developing affairs in addition to sustaining sports and arts . Galaly’s achievements has been decorated by Her Majesty Queen Margrethe II of Denmark who signed an official Royal decree to bestow Enan Galaly one of the highest titles in Denmark: “ 1st Degree knight of Dannebrog”. This honor is considered as an appreciation for his role and exerted efforts locally and globally.

Enan Galaly has been for decades and still a subject for media’s interest, whether in relation to issues that concern local development or international connections in various aspects. The media referred to Galaly by numerous titles “The Hotel’s Tycoon”, “The Hotel’s King” and The US government web page called Enan “The World Most Famous Dish Washer”, etc…, but he prefers to describe himself as “The Foreign Worker “. Enan Galaly is very humble and proud that he began his career from scratch without any tools and always likes to equate with his subordinates at work.

Ambassador of Denmark for the Historical Relations to the Middle East, announced by the Danish Minister of Foreign Affairs for encouraging and continuing of the historical and cultural relations for years ahead which started 250 years ago by the Royal Danish expedition to the Middle East and the Arab World

Five Honorary Doctorates, as a Role Model and as a Global Citizen for American youth including an Honorary Doctorate granted from Farleigh Dickinson University, U.S.A, where Galaly made a keynote speech for Approx. 12000 attendees.

Recognized as a Role Model and Global Citizen for Japanese youth, the most recent Honorary Doctorate is awarded from J.F. Oberlin University Japan

Invited by U.S.A. President Barack Obama to represent Denmark in Washington D.C. to participate in the Presidential Summit on Entrepreneurship.

Member of several delegations headed by Her Majesty the Queen of Denmark, His Royal Highness the Prince Consort and Prime Minister of Denmark representing the tourism and hotels industry.